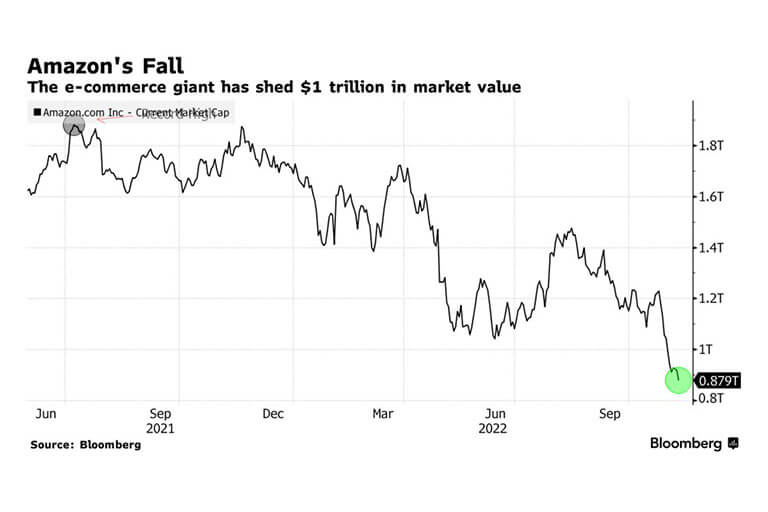 Making another record for itself, Amazon Inc has become the world’s first public company to lose a trillion dollars in market value. The tanking prices have been attributed to rising inflation, tightening monetary policies, and disappointing earnings updates. Earlier in the year, the company had predicted the generation of $140 billion to $148 billion in revenue during the final quarter of 2022, even then disappointing the Wall Street analysts who had projected revenue around $155 billion.

The e-commerce giant’s shares fell nearly 4.3% in the second week of November 2022, pushing its market value to about $879 billion from a record close of $1.88 trillion on July 2021. In the unpleasant competition between Amazon and Microsoft Corp to reach the unfortunate milestone, Amazon reached the finish line first. On the other hand, the Windows software maker closed after losing $889 billion from a November 2021 peak.

The looming threat of a recession in the coming year has taken a toll on technology and growth stocks, not even leaving the cloud provider giants untouched. In 2022, the top five US technology companies by revenue have together seen a loss of nearly $4 trillion in market value. The top executives of the companies caution that along with the falling market value, the weaker-than-expected holiday forecast is a sign of worse days of economic slowdown. They have warned that the current scenarios should worry anyone, regardless of their vested interest in seeing Amazon succeed or fail.

Apart from Amazon, other industry giants, such as Google and Microsoft, have also released their cautionary statements to the public. The companies have informed investors of their choice about slowing or freezing hiring, and the mass layoffs from the tech companies were another phenomenon triggered by economic uncertainty.

“We are taking actions to tighten our belt,” Brian Olsavsky, Amazon’s chief financial officer. “I think every company is trying to save money,” he continues. With Amazon’s core retail business softening as shoppers spend less, especially in Europe, the economic climate in certain regions needs to be mentioned. “Europe has been weaker than North America, although we see the impact of consumers tightening their belts a bit globally,” says Olsavsky.

As the world’s largest online retailer comes to terms with the nosedive their market value has taken, it needs to be mentioned that the value has fallen while the customers are returning to their pre-pandemic shopping habits. In times of slowing sales, the shares have dipped close to 50%. Since the start of 2022, Bezos has had his fortune balancing between $83 billion to $109 billion, according to data compiled by Bloomberg. Even in the holiday quarter, the company’s revenue growth has been slow. Perhaps due to the inflation and financial crises in key markets, shoppers have taken to spend their money elsewhere. This is what essentially drove Amazon’s market value to below $1 trillion for the first time since the pandemic-fueled rally in tech stocks more than two years ago.