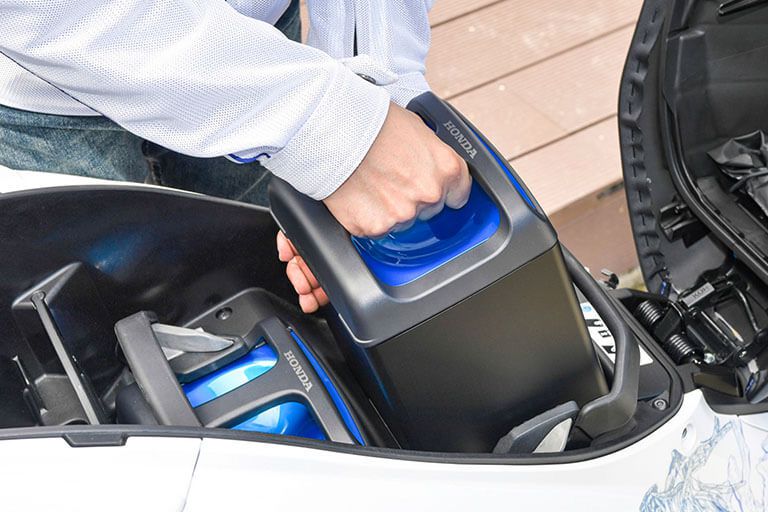 Honda has been proposing a battery-swapping infrastructure that would allow motorcycles, scooters, and other vehicles to use the same interchangeable power packs for several years; with the release of the Honda Power Pack Exchanger e:, the company has finally taken a major step toward realizing this vision.

Scooters with removable batteries are already popular in some areas of the world, such as Taiwan, where the Gogoro battery pack has been adopted by 10 different manufacturers and 47 different kinds of bike and where more than 2300 “GoStations” may be used to switch out worn-out batteries for new ones.

A wall of Honda Mobile Power Pack Exchanger e: units may be assembled from a single “control” unit and many “extension” units that appear identical to the former but do not have an ID card reader.

Ingeniously, the MPP Exchanger e: may be powered by a Mobile Power Pack e:, allowing clients to collect charged batteries even if the mains energy supply is shut off, as can happen during a power outage.

At first, the Mobile Power Pack e is only available in Japan and India, where a Honda subsidiary is launching a battery-sharing program for electric rickshaw taxis.

Chargers like this have the potential to become as commonplace as gas stations in the not-too-distant future, as expressed by Honda’s ambition that the technology “can gain universal use inside and outside of Japan.”

To reach a comparable consensus on standard, swappable batteries, Honda is leading a separate group in Europe that includes companies like Piaggio and KTM. The Mobile Power Pack e: and the Mobile Power Pack Exchanger e: both adhere to the Honda standard developed in Japan, therefore their adoption by that organization is a foregone conclusion.